The benefits: known and unknown

The physical benefits of regular physical exercise have been long documented.  Most people know that there is irrefutable evidence that exercise plays a role in prevention of several chronic diseases (e.g., cardiovascular disease, diabetes, cancer, hypertension, obesity, and osteoporosis). However, the purpose of this article is not to force feed you more information on the effects of exercise on cardiovascular health.  This article is presented to highlight the less heard of, but equally important benefit of activity – physical activity’s relationship to increased mental health and cognition.

Motion is in many ways, IS like lotion.  As hundreds of TV commercials point out, lotions can be used to keep the skin young and healthy.  Regular physical activity, when done appropriately, can have the same effects on the musculoskeletal and cardiovascular systems, and also benefit a person’s mental health and cognitive function. Recent research has shown that regular habitual exercise is related to a decreased risk of all forms of dementia.  This makes 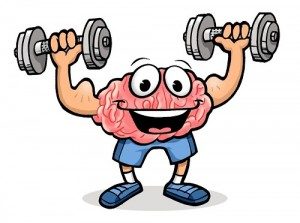 exercise one of the most well founded, manageable and adaptable risk factors of dementia.  In fact, regular exercise at any age has demonstrated the ability to decrease the onset of dementia in later years.

How much exercise is enough?

You may wonder what level of activity is required for such benefits? The good news is that ANY regular activity can lead to a decreased risk of dementia.  When exercise is done in bouts of at least 10 minutes, both light-moderate and vigorous exercise have been shown to decrease the risk of developing dementia.  In order to gauge what level you are exercising at, let your breathing be the determining factor.  If you are able to carry on a conversation while working out, you are most likely exercising at a moderate level.   Vigorous activity requires increased breathing, causing broken and fragmented sentences.

Nearly 14% of the US population over the age of 71 has some form of dementia, with 1 in 10 over the age of 65 suffering from Alzheimer’s.  Dementia is not a part of normal aging, and your own body has the ability to help prevent it from affecting you. All it takes is to get up and get moving!